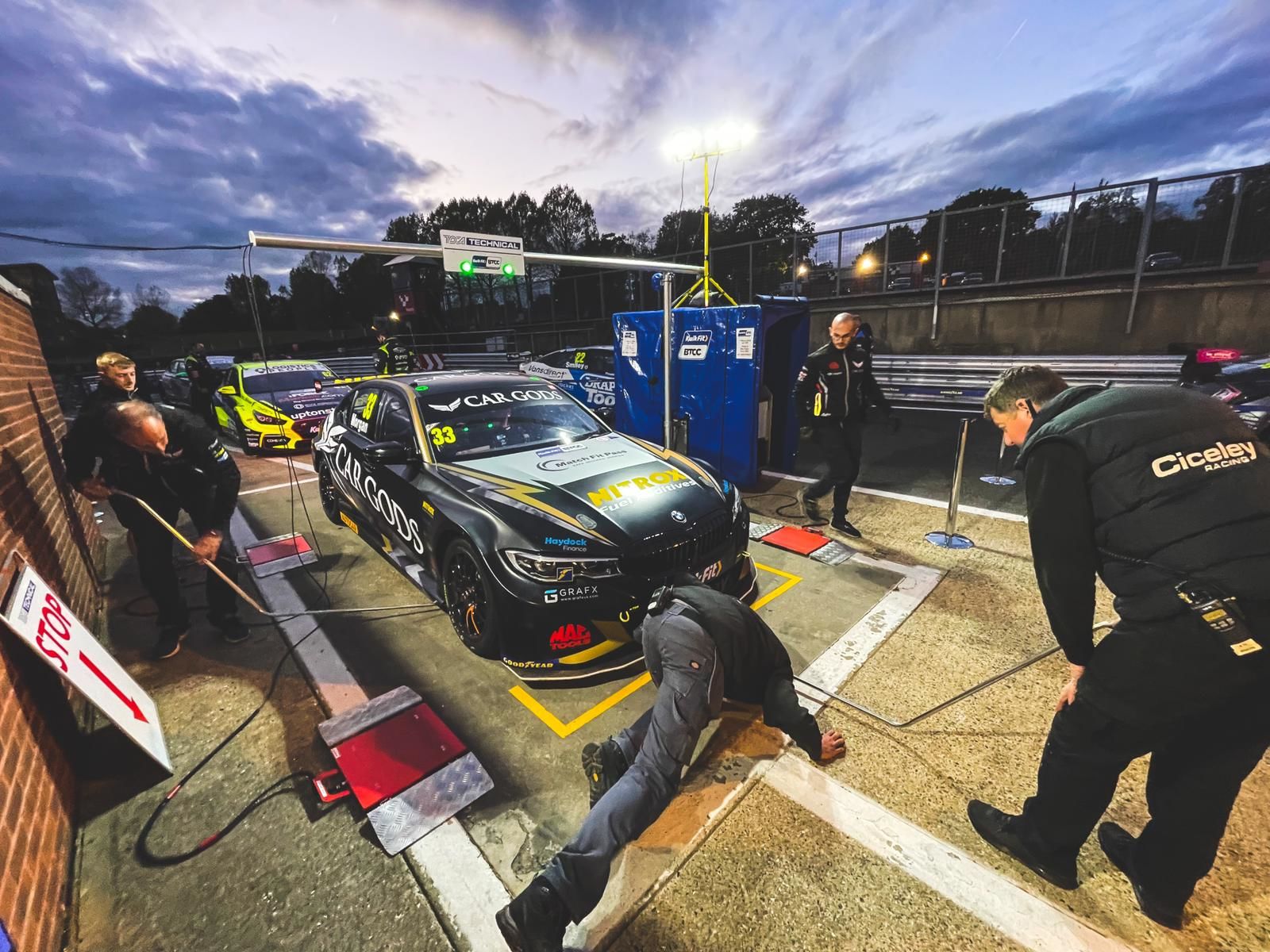 Another action-packed weekend for Car Gods with Ciceley Motorsport.

Another action-packed weekend for Car Gods with Ciceley Motorsport resulted in Tom Chilton’s best weekend of the season for the team and more gritty performances from Adam Morgan in their BMW 330i M Sports.

Tom took a season-best of 10th in qualifying while Adam was only 16th and at a loss to immediately explain where the time went missing. A damper change improved his BMW for raceday and he was set to make progress in the opening race. Tom, meanwhile, made a good start and fought his way into the mix pulling a beautiful switchback move as he worked his way to ninth place, his best finish of the season. Adam gained places off the start but was then hung out to dry on the outside line at Druids on the opening lap, which meant that he lost the ground that he had just won.

Adam pulled himself on to the tail of a long line of cars but with the field so evenly matched, making progress was tough. By the last lap, Adam had hunted down Chris Smiley and in a typical never-say-die performance, Adam prised open the door exiting the final corner and the two cars ran side-by-side to the line. As the flag dropped, Adam was ahead by just 19-thousandths of a second. It was only for 14th place, but it put Adam one row higher up the order for race two.

The second race began with a bang when Tom’s Bowker BMW-backed car tried to dive up the inside of Ollie Jackson at the left-hander of Surtees. The gap disappeared as Tom committed to the move which resulted in contact that spun Ollie around and it was collected by Tom Oliphant’s BMW…which then knocked Jackson’s crippled car into the patch of Adam. Damaged suspension put The Morganator out of the race on the spot. With Adam a spectator, Tom battled on to take eighth, his car running 15 kilos of success ballast, the first time Tom had needed to lug the extra weight around this season. Eighth place for Tom was his best result of the season as all the hard work that the team and Tom had put in paid dividends.

For the final race of the season, Adam would line up 29th and last in his Mac Tools supported repaired car and Tom second, on the outside of the front row. As the lights went out, Tom made a good getaway to fend off Ash Sutton for the bulk of the first lap, but as Tom defended the inside at Westfield, his line took him wide out of the corner and Sutton bolted ahead. Tom also came under attack from Dan Rowbottom which made a bold move on the outside at Druids as lighter, front-wheel drive cars came into the equation and pushed Tom back to sixth, still an even better result to round out the season on a positive note. “I’ve never worked so hard,” smiled Tom after race three, “but it felt really good to be up near the front and part of the leading pack.

Adam, meanwhile, had to fight through the traffic and battled his way from 29th to 16th, narrowly missing out on the final point after a typical gutsy performance. “It was nice to finish the race and not be a spectator,” joked Adam.

“We have had a bad last four events really with factors outside of our control, but on the whole we have had a really good first season with the BMW. We have learnt a lot about the car and Tom and I have also had to learn to drive it and adjust our racecraft and our driving accordingly. Little things like how a car reacts to a slide or the way of trying to race with someone are different in rear-wheel drive cars and we both have more front-wheel drive experience. We have had two wins which is really good and we have developed the car well to carry weight, so it has been rewarding in the wins that we have had and in terms of what we have learnt.”

Adam ended the season 13th in the championship with Tom 19th, Car Gods with Ciceley Motorsport ninth in the Teams’ Championship.

Said Ciceley Motorsport’s Commercial Director Norman Burgess: “It’s been another weekend of highs and lows but it has been fantastic to see all of Tom’s hard work reap rewards with race results that became better and better in each race. He’s worked really hard to get on top of rear-wheel drive this season so it has been a real boost for all of us to see a top six to round out the season. Adam was just in the wrong place at the wrong time in race two and the damage affected two races for him.

“We can look back at a really good season though. We have had a new sponsor on the cars with Car Gods joining us this season and as the world has opened up we have been able to welcome them and their guests to race weekends and enjoy first-hand the drama in the BTCC. It has been a new car and a new transmission for us to learn about and two wins are fantastic in our maiden year with the BMW. Everyone at Car Gods with Ciceley Motorsport can be very proud of 2021 and with hybrid technology coming in for 2022, we want to be up at the front fighting for wins and titles.”

The 2022 British Touring Car Championship kicks off at Donington Park on April 23/24.

YOUR PERFECT BMW COULDN’T BE CLOSER.